In this post I will show you that how you can exactly implemented system command using python.Here we use for example ls -l command. When I use this command in terminal it gives me following output

Now this command we can implement by following methods using python 🙂

Hope this will help you 🙂

Here I am showing you how can you pass the random variable to shell script. ( i.e like $uname 🙂 )

You can receive data using $1 or $2 variable but you can’t directly receive data into $uname or any random variable.
Here is my bash file demo.sh

You have to send it via environment variable . This is simple code snippet how you can you pass this. php file name is shell.php

Here is snapshot of terminal output 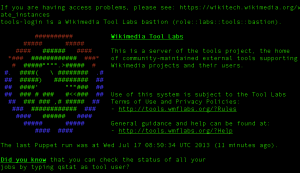 After creating an account and being approved by admin. You will log in to your tool using this command.

Now this have following things

Now Creation of databse for your project

In the first step you have to find you username and password by using “” file.

After that your database name must be USERNAME__DBNAME (2 underscore)

you can access this database by using this command

If you want to connect the database to your project

Hope it will help you 🙂

Link of my tools on wikimedia labs : lcm-dashboard

I am very excited (and also a little late :D) to share the news that I have been selected as an intern for Google summer of code in Wikimedia Foundation for the project of developing language coverage matrics dashboard for language engineering team of Wikimedia Foundation.

I would like to thank my mentors Runa Bhattacharjee and Alolita Sharma, for guiding me throughout and very special thanks to Amir Aharohi for his valuable inputs for this proposal. Last but not the least special thanks to Sumana and Quim for polishing up my proposal, and the feedbacks all this while.

Being selected as a GSoC intern was finally a good news after quite while. The result came at 12:30 midnight – I couldn’t sleep. Nevertheless, great night it was and so was the news.

Community bonding period started right after. I tinkered around a few new technologies and did the overall planning for my project. 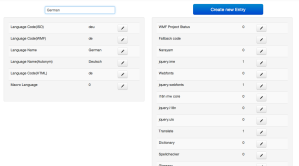 Edit button for on the spot editing

when click on edit button this menu will appear

After saving the changes it will change

Return dataType is : JSON and if you are using cross domain data transfer then it should be JSONP.

It will return the data in JSON format.

Beautiful example of this API usage is here

OpenCV (Open Source Computer Vision Library) is a library of programming functions mainly aimed at real-time computer vision, developed by Intel, and now supported by Willow Garage and Itseez. It is free for use under the open source BSD license. The library is cross-platform. It focuses mainly on real-time image processing. If the library finds Intel’s Integrated Performance Primitives on the system, it will use these proprietary optimized routines to accelerate itself.

Here in this BlogPost I will explain you to install OpenCV(version 2.3, 2.4) on your MAC 🙂

There are two way to build openCV on your MAC.

1. You can use MacPorts

For this first you have to install MacPorts. The easiest way to install MacPorts on a Mac OS X system is by downloading the dmg for Mountain Lion, Lion, Snow Leopard orLeopard and running the system’s Installer by double-clicking on the pkg contained therein, following the on-screen instructions until completion. Installation package is here.

After installing MacPort you have to update it to latest version.

Now you can install OpenCV by running following command

If you want to install python building

So by this way you can install OpenCV in your MAC OS.

2. You can use CMake

By using CMAKE you can also install OpenCV on  your mac. For that first you should have to install CMake, which thankfully comes with Mac binaries – so that was easy. You can download .dmg file here.

After installing CMake you have to download the OpenSource Package that you can download by clicking here.  Now you have OpenCV-2.4.3 ter.bz2 and unzip to folder. Now open terminal and go to that folder and write following commands in Terminal.

Now You have done. Congrats you have installed OpenCV on your MAC 🙂

Now you can check by doing following thing.

If you have any doubt or problem then you can comment here. Thanks.